Au∙tom∙a∙ton {ô ’ tämә , tän} noun. A moving mechanical device made in imitation of a human being, which performs a function according to a predetermined set of coded instructions. plural: Automata.

The art of automata goes back centuries, usually crafted by superb Swiss watchmakers who were known for their detailed work. Their creations combined exquisite art with precise mechanism.

Watching an automaton in motion is an entrancing, mesmerizing experience. It has the power to draw the viewer in and evoke amazement and reflection on the human condition. It is also a distinctly mechanical, tangible, non-digital object, and a reminder that such objects inhabit our world in a way that the best digital creation cannot.

From a young age, David Dumbrell has had a fascination for all things mechanical: how they worked and how they moved. They always caught his eye and held his attention.

Soon after retiring from his woodworking business, David happened to notice Doug Taylor’s kinetic sculpture “The Wind Swimmer”, displayed at Kitsilano Swimming Pool in Vancouver. In his early research into this new interest, he came across automata. These intricate animated figures captivated him, and he decided to pursue creating his own.

Using gears, cams, levers and pulleys which David designs and fashions himself, he tries to capture the grace and fluidity of human movement. The concepts and execution of the pieces are his own, with the help of his wife Maryke who gives the pieces their personalities by painting and deciding upon the fabrics and colours. David also repurposes second-hand doll parts and doll clothing, giving them new life in unexpected ways.

Recently, David has branched out into metalwork, resulting in rolling ball sculptures and kinetic water fountains.

In just a few short years, David Dumbrell has garnered both local and international recognition for excellence and originality in his art and craftsmanship. David lives and works in Vancouver, BC, Canada, and is a member of the Sculptors Society of BC, an associate sculptor of Sculpture Northwest, and a member of ReVision. 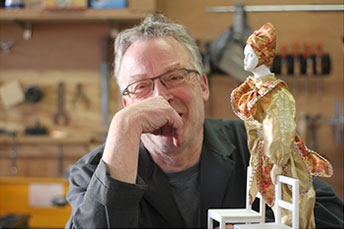 My work combines the skill of wood sculpting, metal-working and the creativity of design and concept with the complexity of engineering and electronics.

I am primarily inspired by the automata masters of old – the famed eighteenth century Swiss watchmakers Pierre Jaquet Droz and Henri Maillardet. While I cannot hope to ever match their mastery, I like to challenge myself with increasingly more complex work. To this end I moved from wood mechanics to metal, and subsequently introduced motorized movement. I design and machine all wood and metal parts, and I am even teaching myself to sew. In addition to designing and creating my own human and animal figures, I also try to repurpose dolls and clothing where I can. Recently I have expanded my practice to include “marble run” rolling ball sculptures and even kinetic water fountains, which often include various repurposed and recycled items.

I hope you enjoy my automata and kinetic sculptures as much as I enjoy creating them.

Click on a thumbnail below to view each automaton in action:

Swipe left and right through the thumbnails below and tap to view each automata in action:

Sculptors Society of BC

Comments and questions are welcome – I’d love to hear from you. Use the form below to get in touch, or send me an email at info@daviddumbrell.com.